The Oecumenical Ideals of the Oxford Movement.

Evangelicals and the Oxford Movement.

1st edition. "John Carrick uncovers some of the main influences at work in the formation and rise of the Tractarian or 'Oxford' Movement and trenchantly exposes its innate and fundamental hostility to evangelical doctrine and life." Pp.52. Paperback, sunning to spine. G+. View more info

The Mind of the Oxford Movement.

Reprinted with slight revision. "In his substantial introduction and through his chosen passages the editor throws light on the thought and life of Newman, Keble, Pusey and their fellow-leaders of the Movement." Pp.239. Dark blue cloth, d/w edges rubbed. VG/G+. View more info

"This book datails the people and events in the extaordinary life of John Henry Newman - Victorian author, Anglian clergyman and Catholic Cardinal - both before and after his conversion to Catholicism in 1845.Pp.127. 8 b/w photos by author. P/b. portrait front & back cover. VG. View more info

Tract One. Thoughts on the Ministerial Commission, respectfully addressed to the Clergy.

With an introduction by the late Rev. Dr. Alan Stephenson. No. 158 of a limited edition of 525 copies designed and letterpress printed by Jonathan Stephenson of The Rocket Press. Pp.21, tipped in portrait frontispiece + facsimile of one page from Newman's original Tract One manuscript printed on Italian hand-made paper, a few minor brown spots. Grey illustrated boards. VG. View more info

Tract Ninety or Remarks on Certain Passages in the Thirty-Nine Articles.

Reprinted from the edition of 1841 with an historical commentary by A.W.Evans. Pp.lviii/102, owner's name to front free endpaper, minor spotting to endpapers. Black cloth, gilt title to spine, wear to spine with 3cm split to cloth at tail. Good. View more info

The Parting of Friends. The Wilberforces and Henry Manning.

1st Eerdmans and Gracewing ed (joint publishers). 23.4cms. x 15.5cms. "Newsome's work is a model of historical biography, a moving portrayal of individual human lives in the widest possible context. It is everything that other religious biographies are not: a graceful work of scholarship in depth." Pp. 13/486, 19 b/w illustrations, 1 Family Tree, owner's bookplate to fep. illustrated d/w has clear protective wrap affixed. G+/VG. View more info

The Anglo-Catholic Revival. Some Persons and Principles. Six Lectures delivered at All Saints',Margaret Street.

By: ORFORD, Barry A and DAVAGE, William. (editors).

Essays presented the The Revd Philip Ursell. The aim of this book "has been to capture something of the personalities of the Principals, and, in particular, to record where possible, recollections from those who knew them andwere influenced by them." No.276 of a limited edition of 300 copies. Pp.113, 8 black & white photo plates, Paperback. VG. View more info

1st ed. "16 distinguished international theologians reflect on the significance of the Movement which changed the face of Anglicanism and reassess it historically and theologically. Their papers are of major significance in the context of contemporary discussion of Anglican identity and issues of authority in the Church." Pp.xvi/237,slight toning to pages. Paperback. VG. View more info

The Vision Glorious. Themes and Personalities of the Catholic Revival in Anglicanism.

The Autobiography of Isaac Williams, BD...As Throwing Further Light on the History of the Oxford Movement.

"Some of the Editor's own recollections of the great actors in the movement are inserted here and there in notes, and especially of John Keble." Pp.viii/186/17(publisher's catalogue), scuff to first page. Blue cloth, gilt title to spine, minor edge bumps. G+. View more info

Northern Catholicism. Studies in the Oxford Centenary and Parallel Movements.

1st ed. Includes chapters on: 1. The Genesis of the Movement.by C.P.Clarke. 2.The Revival from 1845-1933. by W.J.Sparrow Simpson. 3. The Catholic Revival in the American Church,1722-1933. by Edward Rochie Hardy. 4.The Oxford Movement in the Empire and in the Mission Field. by Stacy Waddy. 5.The Theology of the Catholic Revival. by N.P.Williams. 6.The Moral Ideals and Aims of the Movement. by Eric Graham. 7.Pastoral Ideals and Methods of the Movement.a) The Tractarian Tradition by E.A.Down. b)Subsequent Developments by Francis Underhill. 8.The Development and Deepening of the Spiritual Life.... View more info 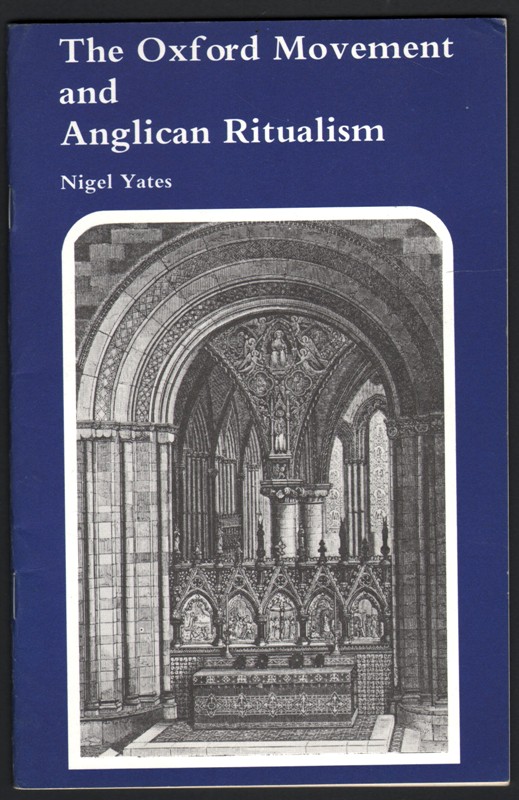 The Oxford Movement and Anglican Ritualism.

1st edition. "The Oxford Movement has come to be taken as beginning with Keble's assize sermon preached before the University of Oxford on 14 July 1833...Nigel Yates here reassesses the character of the movement, with particular reference to its influence within the Church of England." Pp.44. Paperback. VG. View more info

New edition. Originally published in the "British Magazine" contemporarily with the "Tracts for the Times" and the "Churchof the Fathers". "All three had one object, that of enforcing what the authors considered to be Apostolical or Primitive Christianity, at a time when its principles, doctrines, discipline, usages, and spirit seemed, in the length and breadth of the Anglican Communion, to be wellnigh forgotten. The "Lyra Apostolica," on the whole, took the ethical side of Christianity; the Tracts, the theological and controversial; while the "Church o... View more info