Melville. A Collection of Critical Essays.

Rep. "In this collection, the author has gathered the leading critical essays which stimulated and established the Melville revival". Pp 168. Pbk, creasing to cover. G+. View more info

1st ed. "The purpose of this reference book is to anthologize the available English-language dissertation abstracts on Herman Melville, to index them properly for the benefit of future doctoral candidates planning to write a dissertation,book, or essay on Melville, and to enlighten such scholars with an essay on 'Research Opportunities in Herman Melville'." Pp.12/482. Green cloth. VG+. View more info

1st copy. " Professor Maxwell describes in this volume the development of Melville's art as a novelist, with particular reference to his depiction of character and his use of symbolism." Pp.101. P/b, slightly marked covers. G+. View more info

Hawthorne, Melville, and the American Character. A Looking-glass Business.

1st ed. "The writings of Hawthorne and Melville are studied in the context of their generation's assumptions about the character and direction of America." Pp. 11/261. Dark blue cloth, d/w has clear film protective wrap. VG/G+. View more info 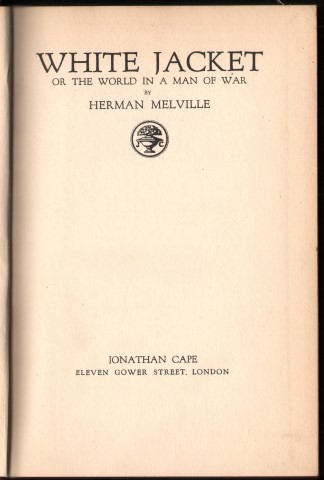 White Jacket. Or The World in a Man of War.

White-Jacket; or, The World in a Man-of-War is the fifth book by American writer Herman Melville, originally published in London in 1850. The book is based on the author's fourteen months service in the United States Navy, aboard the frigate USS United States....The novel contains vivid descriptions of flogging, a brutal staple of 19th century naval discipline. Pp.374, the inside front board has an interesting wood-cut bookplate "Ex.Libris R.T.Gibbon" which shows a gibbon hanging from a tree and reaching up to pick an apple, another owner's name to inside front board, pages browning. ... View more info

Mardi. And A Voyage Thither.

1st ed. "The life and writings of one of America's greatest men of letters are examined in their historical context in this new study". Pp. 12/170, 4 illustrations. Blue cloth, illustrated d/w. VG/G+. View more info