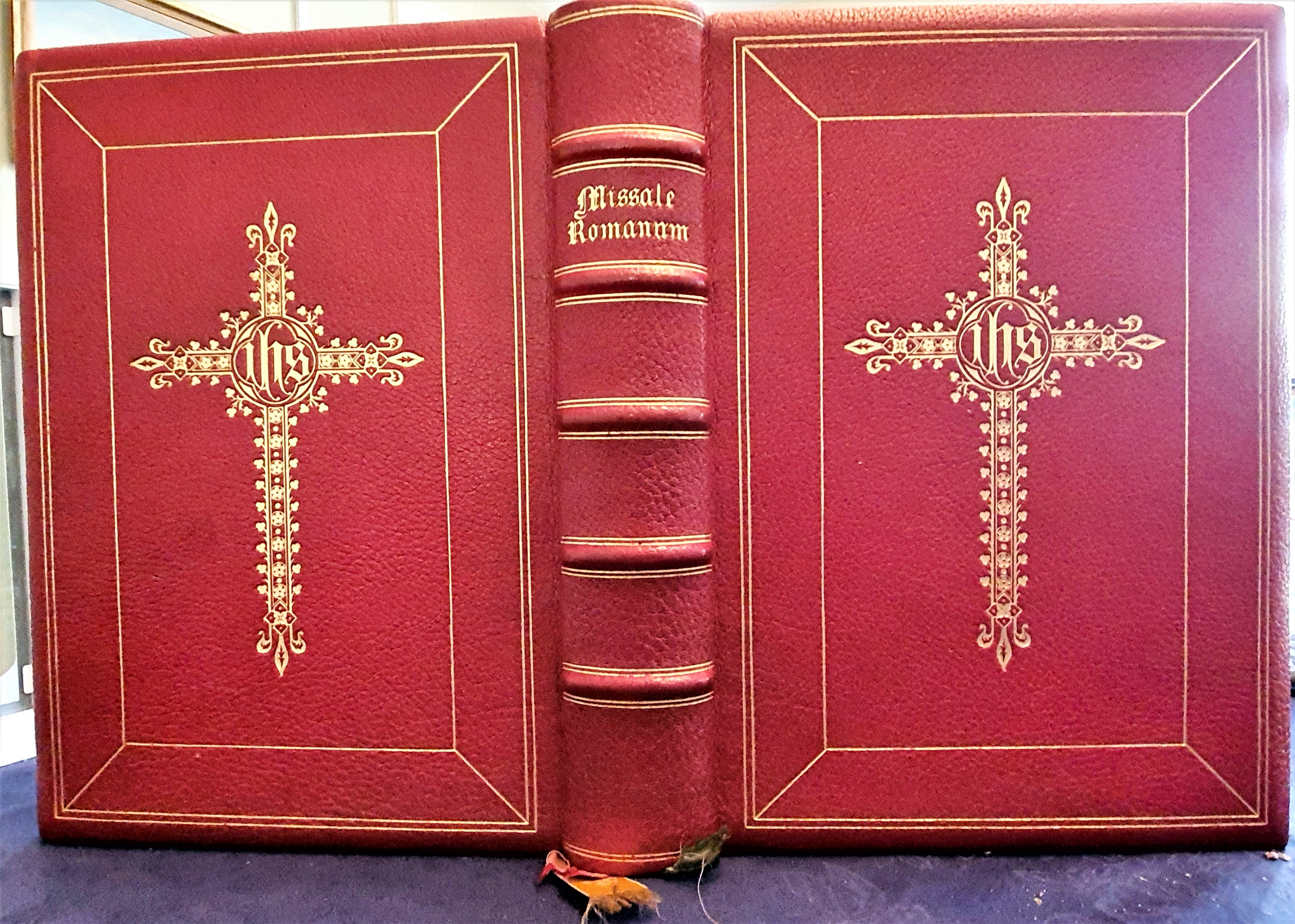 A very good folio Missal in a grand red leather binding. 37.5cm x 27.0cm x 7.0cm. pp.39/[4pp.]/pp.600/pp.244/pp.2/pp.25/pp.4/pp.4/[34pp. - Blank sheets] . Polished red calf over thick boards. Bright gilt cross to both boards. Spine with 5 raised band and gilt title: "Missale Romanum". All page edges bright gilt. Maroon silk tabs added. Inner gilt dentelles. Silk marker present, made up of 4 diferent coloured and embroidered ribbons. Marbled endpapers. Fine illuminated dedication to front free-endpaper: "Presented To St. Joseph's Convent by Mr. & Mrs. Allen. To The Glory Of God And In The Memory Of Their Beloved Son Alfred James Benedict 2nd Lieut. 17th Batt: R.W.F. Killed In Action 3rd March 1916 In The Twentieth Year Of His Age. On Whose Soul Sweet Jesus Have Mercy R.I.P." Clean Latin text throughout in red & black, with full-page black & white images. VG. As this is a heavy book, there will be an extra charge for overseas postage. ** "Alfred James Benedict Joseph Allen 2nd Lieutenant, 17th Royal Welsh FusiliersKilled in action, 3 March 1916, aged 20. Buried at Le Touret Military Cemetery, Richebourg-L’avoue, France. CWGC registered (Son of Alfred and Jane Monica Allen, of Great Orme, Llandudno). Alfred James Benedict Joseph Allen was born at Aston Manor (now part of Birmingham) in 1895. He was the eldest son of Alfred Allen and his wife Jane Monica Allen (née Timmins) who had a pub and off-licence. Alfred attended St. John’s Preparatory School at Alton Castle in Staffordshire which was attached to a Roman Catholic convent run by the Sisters of Mercy. In 1911, the family, including eight of Alfred’s siblings, lived at Sutton Coldfield, Alfred (senior) being described as a retired house agent. Alfred (junior) is not recorded at that address though a James Allen, 14, born in Aston, is recorded as a visitor at another address at nearby Erdington. Later, the family moved to Craig-y-Don. It is reported that Alfred (junior) intended to become a Benedictine monk and studied at Catholic colleges at Mardesous and Bruges in Belgium. In early February 1915, Alfred Allen joined the 17th Battalion of the Royal Welsh Fusiliers with a regimental number of 25142. He was promoted to corporal and then was commissioned as a temporary second lieutenant on 7 May 1915. The battalion had formed at Llandudno earlier that year. After training, the battalion left Winchester on 4 December 1915 and landed at Le Havre on the following day. Alfred Allen was killed in action on 3 March 1916 aged 20 when he was shot by a sniper when he lifted his head above the parapet of the trench near Le Touret that he was occupying. He was buried at Le Touret Military Cemetery." - See Parish of Llandudno Great War