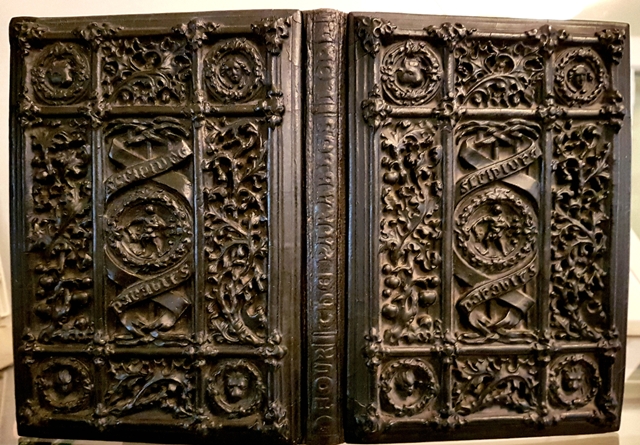 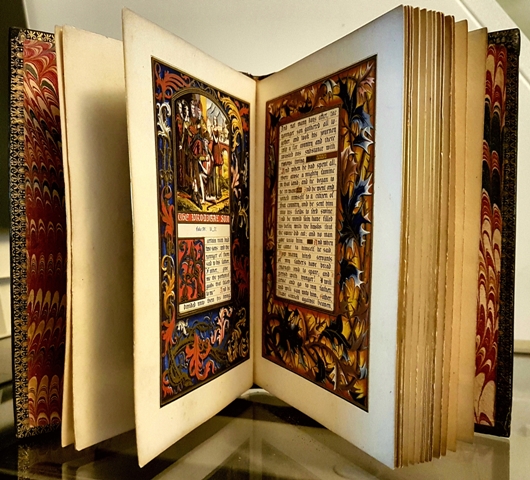 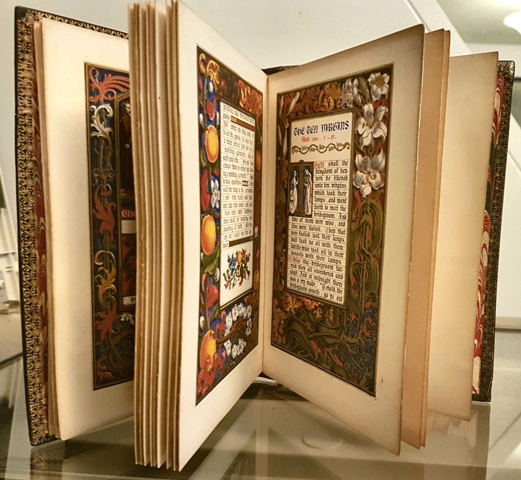 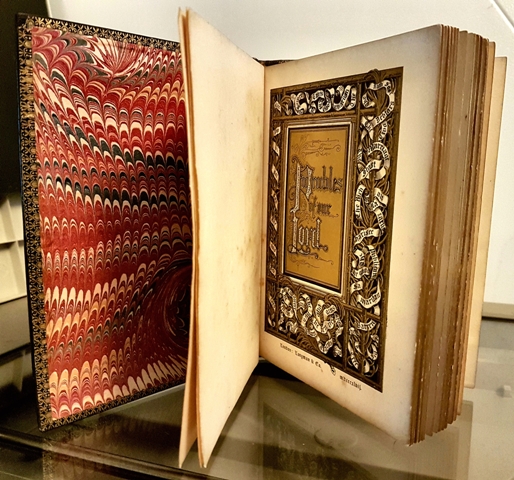 Black papier-mache boards with raised decoration, deeply incised to resemble "Gothic" ebony book covers. A very good and tight binding with all pages present. 6.50" x 4.75" x 0.75" (17cm x 12.4cm x 2cm) . Original black leather spine, carefully strengthened, with blind-stamped title: "Of Our - The Parables - Lord". All page edges gilt. Original marbled endpapers. Inner hinges carefully repaired. Free-endpapers lightly toned. With 16 leaves (32 un-numbered pages), richly lithographed and Illuminated in gold and colours by Noel Humphreys, followed by one leaf of text (lightly toned) with the words of the parables and adverts for the next two publications: "The Sermon On The Mount" and "The Miracles." A very good example with only light soiling to the pages. ** The last decorated leaf ends with: "In designing the ornaments to the sacred parables contained in this volume the illuminator has sought to render them in each instance appropiate. The work of illumination commenced on the first day of may in the year of Lord MDCCCXLV and terminated on the tenth day of Febr. MDCCCXLVI. HNH." *** "Parables is Humphreys’ first printed illuminated book in a papier-mâché binding. designed entirely by him and executed using chromolithography, alternating the double pages of warm colours with those of cool tones. The publisher recorded that 2,000 copies of Parables were printed in 1847, of which 1,000 were sold to D. Appleton in New York with a changed title page. Longman’s printed a second edition in the same year. Each of the four corners has a wreath containing the head of an angel, a lion, an eagle or an ox, representing Gospel authors Matthew, Mark, John and Luke. Stylized oak leaves occupy the top and bottom central rectangles. The central figure is a sower within a wreath around which two ribbons are wrapped on a staff. “Scripture Parables” appears on the ribbons in raised Gothic letters." - Referenced by: Ruari McLean, Victorian publishers' book-bindings in paper, 1983, p. 51.