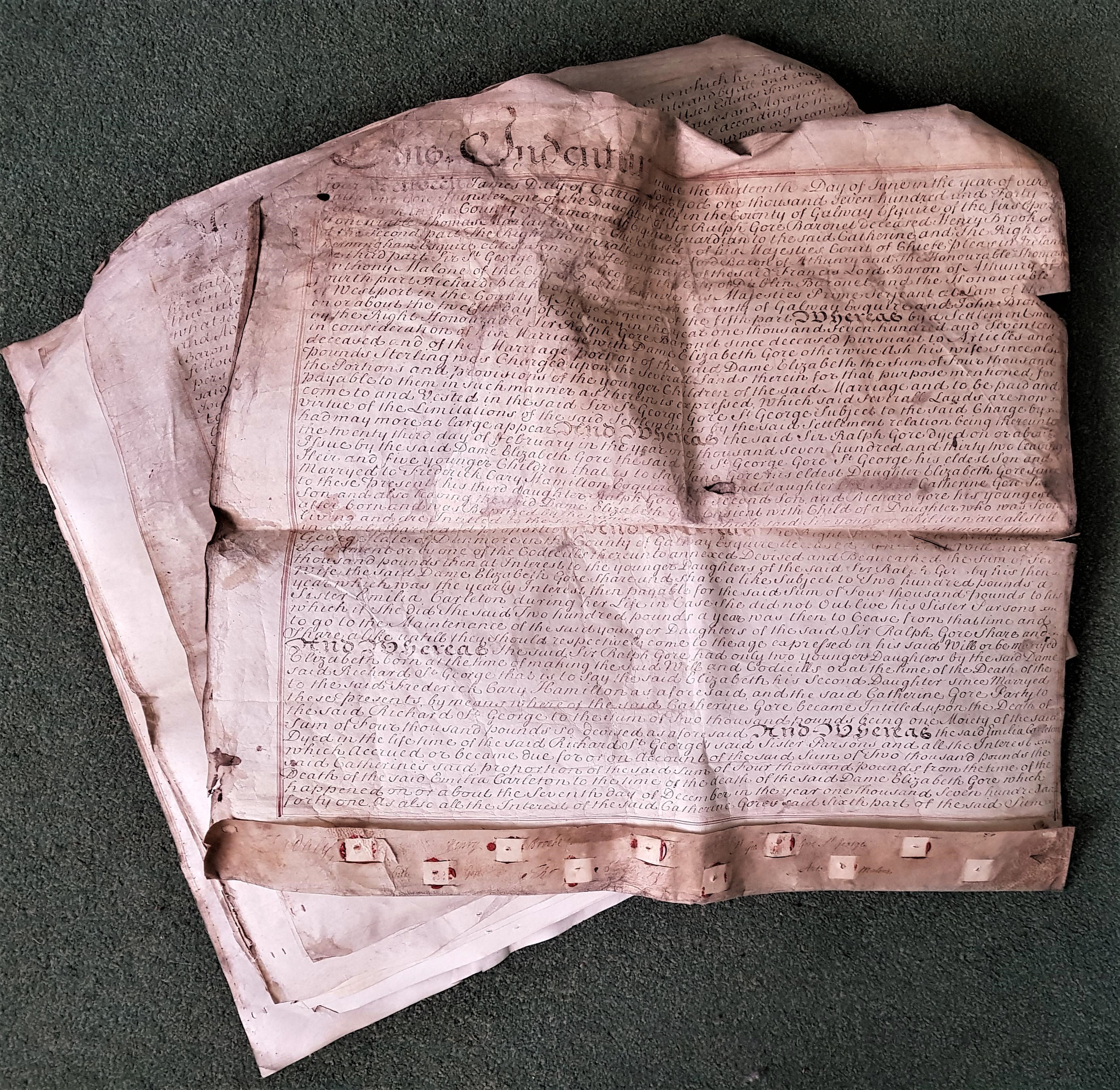 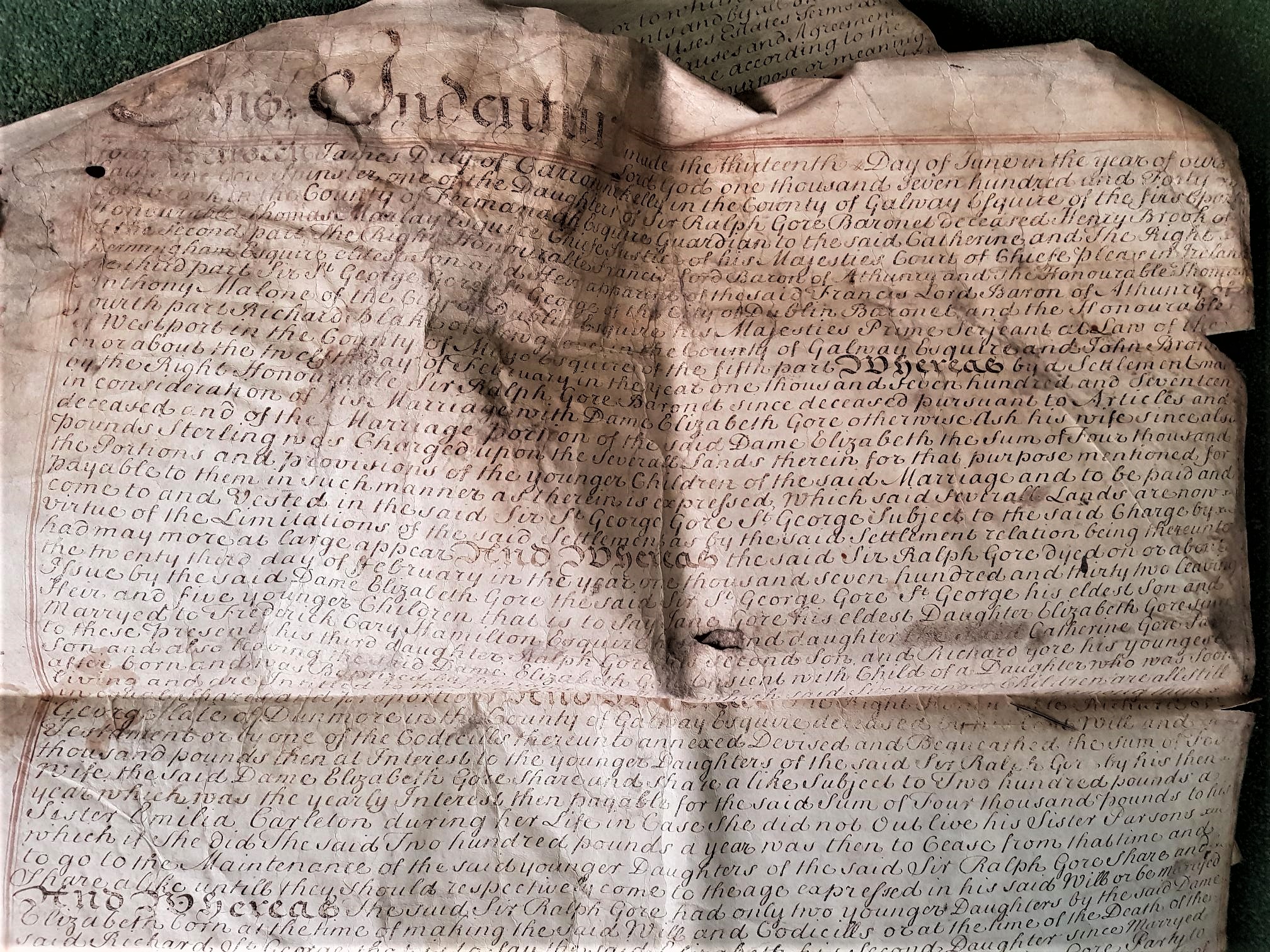 A large Irish vellum document. It consists of 11 sheets of hand written vellum each measuring 26" x 29". Front sheet very soiled around the edges. Other sheets with rubbed and bent corners. Clear English text throughout. Names mentioned, include: James Daly, Kelly, of County Galway Esquire; Catherine Gore daughter of Sir Ralph Gore Baronet, deceased; Henry Brook of County Fermanagh Esquire, Guardian of Catherine Gore; Right Honourable Thomas Marlay Esquire Chiefe Justice of his Majesties Court of Chiefe Pleas in Ireland; Thomas Benningham Esquire eldest son and heir apparent of Francis Lord Baron of Athunny; Sir St. George Gore St. George of City of Dublin Baronet; Honourable Anthony Malone of The City of Dublin, His majesties Prime Sergeant at Law; Richard Blake of County of Galway Esquire; Johne Bran of Westport, County Mayo Esquire. ** "Thomas Marlay (c.1680–1756) was an Irish politician and judge, who ended his career as Lord Chief Justice of Ireland. He is remembered chiefly for the rebuilding of Celbridge Abbey, and as the grandfather of the statesman Henry Grattan." *** "Sir Ralph Gore, 4th Baronet (c. 1675 – 23 February 1733) was a Speaker of the Irish House of Commons. He is now chiefly remembered for building Belle Isle Castle. **** "Sir St George Gore-St George, 5th Baronet (25 June 1722 – 25 September 1746) was an Anglo-Irish politician and baronet. Born St George Gore, he was oldest son of Sir Ralph Gore, 4th Baronet and his wife Elizabeth Ashe, daughter of St George Ashe, Bishop of Clogher. In 1733, he succeeded his father as baronet. He assumed the additional surname of St George to inherit the estates of his maternal grandfather, whose only son had died without issue in 1721. Gore-St George represented Donegal County in the Irish House of Commons from 1741 until his death in 1746." ***** "James Daly (circa 1716 – 1769) was an Irish Member of Parliament. In 1741 he was elected to the Irish House of Commons for Athenry, and then in 1768 for the borough of Galway. He was son of Denis Daly of Carrownakelly and grandson of Denis Daly, a judge of the Common Pleas. He was married firstly to Bridget, daughter of Francis Bermingham, 14th Baron Athenry, and secondly to Catherine, daughter of Sir Ralph Gore, 4th Baronet. His children by his second wife included St George Daly, later a judge, and Denis Daly, father of James Daly, 1st Baron Dunsandle and Clanconal." ******* " Anthony Malone (5 December 1700 – 8 May 1776) was an Irish lawyer and politician. Malone married in 1733 Rose, daughter of Sir Ralph Gore, 4th Baronet, speaker of the Irish House of Commons; they had no children. By his will, made in July 1774, he left all his estates in the counties of Westmeath, Roscommon, Longford, Cavan, and Dublin to his nephew, Richard Malone... In 1740 he was appointed Serjeant-at-law, but was dismissed from office in 1754 for opposing the claim of the crown to dispose of unappropriated revenue. In 1757 he was made chancellor of the exchequer, but his attitude in council in regard to the Money Bill of 1761 led to his again being removed from office." - See Wkipedia