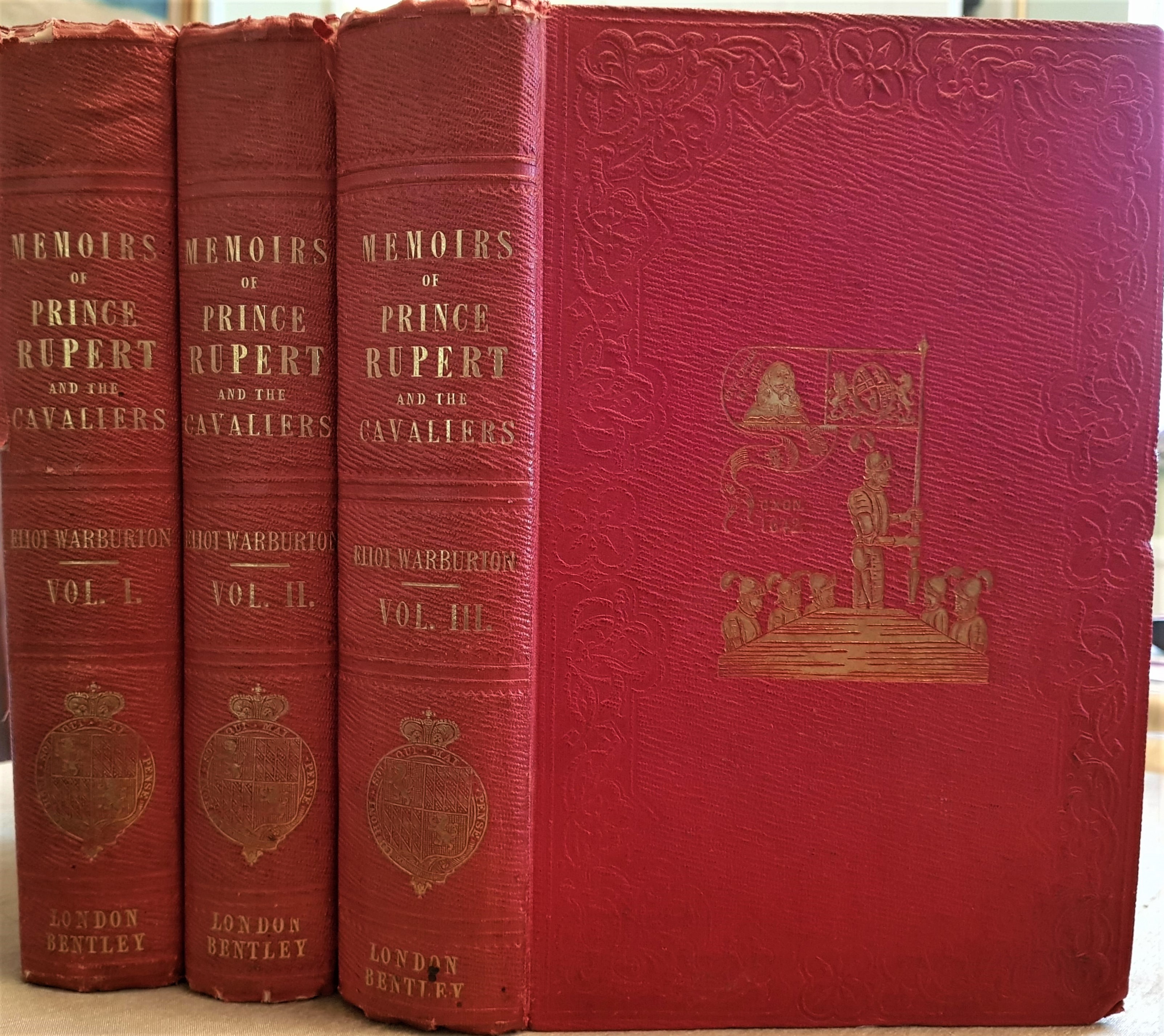 Memoirs of Prince Rupert, and the Cavaliers. Including their private correspondence, now first published from the original manuscripts. By Eliot Warburton... In Three Volumes .

A very good three volume set in the original illustrated red cloth bindings. 8vo. 22.5cm x 15.0cm x 3.5cm. Red blind stamped cloth with gilt image to each front board, edges rubbed and bumped. Spines with gilt titles (a little dulled). original yellow endpapers. Half-title to each volume. Title-pages printed in red and black. With engraved portrait frontispiece in each volume, and other portraits throughout. Includes bibliographies. Clean text throughout just light foxing to the plates. A very good set. Vol. I. : pp.10/pp.539 + 4 portraits. (contents leaf wrongly inserted after title) ; Vol. II. : pp.6/pp.492 + 3 portraits; pp.6/pp596 + 2 portraits and one battle plan ** "Bartholomew Eliot George Warburton (1810–1852), usually known as Eliot Warburton, was an Irish traveller and novelist, born near Tullamore, Ireland. His father was Major George Warburton, Inspector General of the Royal Irish Constabulary for Aughrim, County Galway. His mother was Anne Maria Acton of Kilmacurragh, County Wicklow. He was educated at Trinity College, Cambridge, and was called to the Irish Bar in 1837. He contracted lasting friendships with Monckton Milnes (Lord Houghton) and A W Kinglake, author of Eothen, which he admired. He decided to give up his practice as a barrister for travel and literature... His most substantial work was a Memoir of Prince Rupert and the Cavaliers (1849), enriched with original documents, and written with eloquent partiality for the subject... He was planning to write a history of the poor, and on his last visit to Dublin visited slums and poor areas of the city. However, in 1852 he was sent by the Atlantic and Pacific Junction Company to explore the isthmus of Darien and to negotiate friendly relations between the company and the local Indian tribes. He sailed on this mission aboard the steamship RMS Amazon, and died along with about 110 other passengers and crew when the Amazon caught fire and sank on 4 January 1852 in the Bay of Biscay." - See Wikipedia *** "Prince Rupert of the Rhine, Duke of Cumberland, KG, PC, FRS (17 December 1619 – 29 November 1682) was a noted German soldier, admiral, scientist, sportsman, colonial governor and amateur artist during the 17th century. He first came to prominence as a Cavalier cavalry commander during the English Civil War. Rupert was a younger son of the German Prince Frederick V of the Palatinate and his wife Elizabeth, the eldest daughter of James VI of Scotland and I of England." - See Wikipedia

Title: Memoirs of Prince Rupert, and the Cavaliers. Including their private correspondence, now first published from the original manuscripts. By Eliot Warburton... In Three Volumes .

Memoirs of Prince Rupert, and the Cavaliers. Including their private correspondence, now first published from the original manuscripts. By Eliot Warburton... In Three Volumes .