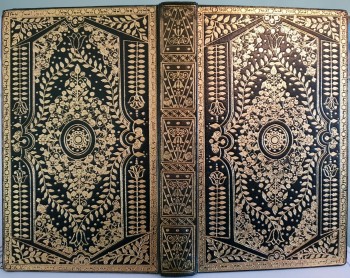 Memoirs of the Lord Viscount Dundee. The Highland Clans, and the Massacre of Glenco, &c. Edited With An Introduction And Notes, By Henry Jenner Fellow of the Society of Antiquaries.

Limited edition. 8vo.7.00" x 4.50" x 1.00". pp.77/[4pp.]/pp.123. Very good full leather binding with bright gilt decoration to both boards and spine. Corners lightly bumped. Spine a little dulled. Top page edges gilt (other page edges deckled ). Original green endpapers. Printed note to front free-endpaper: "This edition is limited to 320 copies for sale and 30 for presentation and review, of which this copy is No.__ ". Half title reads: "The Russell Press. Stuart Series. General Editor: Edward Almack, F.S.A. Volume IV. Memoirs of Viscount Dundee &c." Photogravure portrait frontis of "Claverhouse". Title within ornamental border. Clean throughout. Some pages un-cut. Colophon to verso of the title: "Printed At The Russell Press, 20 Great Russell Street, Bloomsbury". Contents include: Notes on the Binding by Cyril Davenport; Note on the Portraits of Dundee, etc. ; Memoirs of Dundee; The Siege of the castle of Edinburgh; The Siege of the Bass; Gallienus Redivivus; An Account of Dundee's officers after they went to France; Bibliographic note on previous editions; Note on possible Authorship; Index. Excerpt from "Note On The Binding. By Cyril Davenport, F.S.A.": "...The present binding is closely copied from that covering a copy of "The Fables of Pilplay," published in London in 1699, and now forming part of the Royal Library of George III., which was given to the nation by George IV. in 1823. it is bound in dark morocco tooled in gold, and is about the same size as the copy. The architectural fillet runs parallel to the edges of the boards of the book, a little way in, but broken at the top and bottom into the form of an eaved gable, and in the centre of each side it is also broken into an ornamental arrangement of curves and segments of circles. The apex of each gable is inverted and ornamentally segmented in a similar way. Remains of the heavy Jacobean corner ornamentationshow in the fine rich close-gilding with small tools in the inner angles of the main fillet. In the centre an oval of simple character is enclosed within an elongated bordering built up with scrolls of floral designs, many of them with dotted stalks, worked in the manner first introduced by the French binder Le Gascon..." *** "Henry Jenner FSA (8 August 1848 – 8 May 1934) was a British scholar of the Celtic languages, a Cornish cultural activist, and the chief originator of the Cornish language revival. Jenner was born at St Columb Major on 8 August 1848. He was the son of Henry Lascelles Jenner, who was one of two curates to the Rector of St. Columb Major, and later consecrated though not enthroned as the first Bishop of Dunedin and the grandson of Herbert Jenner-Fust. In 1869 Jenner became a clerk in the Probate Division of the High Court and two years later was nominated by the Primate at Canterbury for a post in the Department of Ancient Manuscripts in the British Museum, his father then being the Rector of Wingham, a small village near Canterbury. Jenner was a Tory and Jacobite. He and his wife supported the Order of the White Rose (OWR), a society of Stuart sympathizers which he had founded in 1891, and of which he was chancellor. He also actively supported The Royalist, a journal which ran from 1890 to 1905. He was a key figure in the Neo-Jacobite Revival of the 1890s." - See Wikipedia .

Title: Memoirs of the Lord Viscount Dundee. The Highland Clans, and the Massacre of Glenco, &c. Edited With An Introduction And Notes, By Henry Jenner Fellow of the Society of Antiquaries.

Memoirs of the Lord Viscount Dundee. The Highland Clans, and the Massacre of Glenco, &c. Edited With An Introduction And Notes, By Henry Jenner Fellow of the Society of Antiquaries.