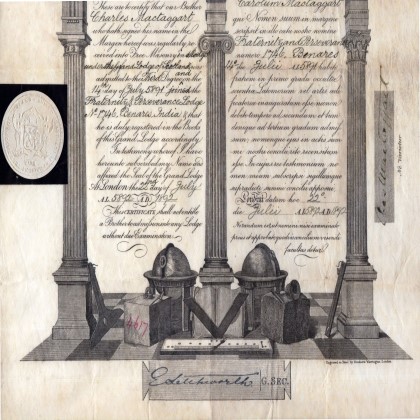 Vellum sheet printed on one side only. With one vertical, and three horizontal folds. 16.00" x 12.00". Engraved on steel by Brothers Warrington, London. Signed by the Grand Secretary: Sir Edward Letchworth, and with the embossed paper seal (United Grand Lodge of England Wales). Light soiling to vellum, but all text and engravings very clear. ** Lodge No.1746 Fraternity & Perseverance India - Benares was formed in 1878 and erased in 1961. *** London Gazette 3 June 1919. ‘Colonel Charles Mactaggart, C.I.E., Indian Medical Service, Inspector-General of Civil Hospitals, United Provinces’. C.I.E.; London Gazette 12 December 1911. ‘Lieutenant-Colonel Charles MacTaggart, Indian Medical Service, Inspector-General of Prisons, United Provinces of Agra and Oudh’. **** "Charles MacTaggart was born on 27 March 1861 in Drumfin, Campletown. Educated at Campletown Grammar School and Glasgow University, he gained a M.A. in 1881 and the M.B. and C.M. (Honours) in 1885. He entered the Indian Medical Service as a Surgeon in 1886 and was in military employ until 1889 when transferred to civil employ in the United Provinces. He was initially a Civil and Prison Surgeon and then Superintendent successively at Benares, Agra, Allahabad and Lucknow Prisons from 1890 onwards. He was appointed Surgeon-Major in 1898 and Inspector-General of Prisons in the United Provinces from 1902 until his retirement. Promoted Lieutenant-Colonel in 1906, he was a Member of the Indian Factory Labour Commission during 1907-08 and a Member of the Legislative Council of the United Provinces in 1909. For his services as Inspector-General of Prisons he was awarded the C.I.E. in 1911. In 1915 he was promoted to Colonel and appointed Inspector-General of Civil Hospitals in the United Provinces. In 1917 he was appointed President of the Medical Council of the United Provinces. For his further service as Inspector-General of Civil Hospitals he was awarded the C.S.I. in 1919. Colonel MacTaggart retired in 1920 and was latterly J.P. for Argyllshire, residing at Dalintober House, Campletown. He died on 18 September 1930. - See DNW Auctions Medals ad Militaria 23 June 2005.