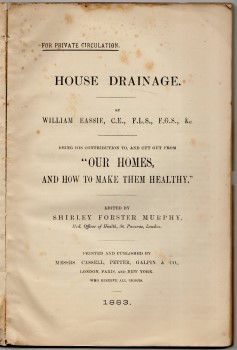 For Private Circulation. - House Drainage. By William Eassie, C.E., F.L.S., F.G.S., &c. Being his contribution to, and cut out from "Our Homes, And How To Make Them, Healthy." Edited by Shirley Forster Murphy, Med. Officer of Health, St. Pancreas .

Booklet for "Private Circulation" signed by the Author. 9.00" x 6.00". Plain brown paper covers, soiled and chipped. Front endpaper with dedication from the author: "J. Slater Esq. With the Authors very kind regards". Printed title (verso blank). Followed by the full text, with title: "House Drainage. By William Eassie... Chapter LXII.". pp.615-710 . Well illustrated throughout. Light foxing to endpapers and last few leaves of text. A scarce publication. Excerpts from Oxford DNB: Eassie, William (1832–1888), sanitary engineer and pioneer of cremation, was born at Lochee, near Dundee, on 8 September 1832, the first of two sons of William Eassie (1805–1861), a carpenter and wheelwright, and his wife, Jean Boyd, whom he married in 1831. William Eassie senior worked on the East Lancashire Railway as an engineering contractor, before settling in Gloucester, where between 1845 and 1849 he established a timber yard on the banks of the Gloucester Canal; here the business supplied the Gloucester and Forest of Dean Railway and other projects... After returning from the Crimea in 1856 Eassie continued as an engineering contractor, constructing the military camp at the Curragh of Kildare, and carrying out mining surveys in Germany, Poland, and elsewhere. He married, in 1858 at Gloucester, Rose Anna Hanlon, the daughter of a Kildare doctor. They had seven sons and two daughters; the fourth son became Brigadier-General Fitzpatrick Eassie (1864–1943), an army veterinarian. Following the death of their father in 1861, William and his younger brother ran the Gloucester timber business until the latter's death in 1875, when it was sold. By 1871 Eassie had moved to Child's Hill, Hendon, with London offices at 1 Great Winchester Street Buildings, then 11 Argyle Street, where he practised as a consulting sanitary engineer. In 1872 he published Healthy Houses, which reflected the growing importance attached to good plumbing and drainage in domestic dwellings. He also edited the dairy engineering pages of the Milk Journal. He was a regular correspondent on sanitary questions; he advocated, for example, that there should be an agreed definition of what constituted domestic waste, which local authorities were required to collect from householders' dustbins under the terms of public health legislation (The Times, 26 May 1885). With Ernest Hart he founded and was a regular contributor to the Sanitary Journal and he was largely responsible for the establishment of the Sanitary Institute of Great Britain... He died on 16 August 1888 at his home, 73 King Henry's Road, Hampstead, and was buried in the family grave at St Mary's Roman Catholic cemetery at Kensal Green on 20 August. There is no memorial on the grave but a tablet on the wall of the gallery in the chapel at Woking commemorates his contribution to the work of the Cremation Society.

Title: For Private Circulation. - House Drainage. By William Eassie, C.E., F.L.S., F.G.S., &c. Being his contribution to, and cut out from "Our Homes, And How To Make Them, Healthy." Edited by Shirley Forster Murphy, Med. Officer of Health, St. Pancreas .

For Private Circulation. - House Drainage. By William Eassie, C.E., F.L.S., F.G.S., &c. Being his contribution to, and cut out from "Our Homes, And How To Make Them, Healthy." Edited by Shirley Forster Murphy, Med. Officer of Health, St. Pancreas .